Owing to a prompt reaction of Eurobank and the "Ana and Vlade Divac" Foundation, two months after the launch of works, the reconstructed Pre-School Institution of Ub, totally devastated in the May floods, has been ceremonially opened. 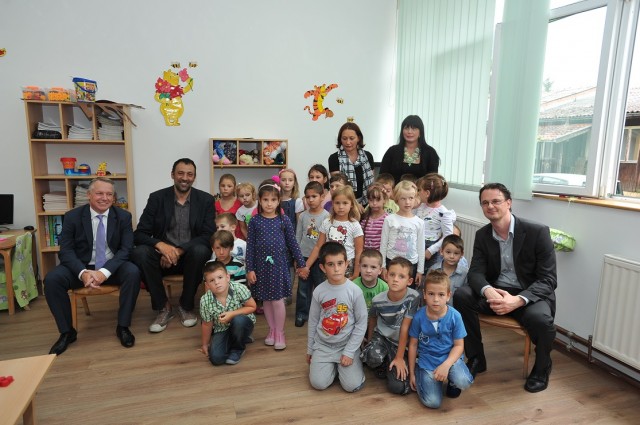 Within the “Big Heart” project, executed together with a long-standing partner, the “Ana and Vlade Divac” Foundation, Eurobank invested nearly EUR 70,000 in the revitalisation of the devastated nursery in Ub immediately after the floods. In the course of the summer months, funds were invested in the execution of the required construction works, purchase of furniture and related equipment, as well as of playground items, so that the nursery was ready to welcome children.
Upon the kindergarten opening, Minister of Education, Science and Technological Development in the Government of the Republic of Serbia, Srđan Verbić, PhD, has once again pointed to the significance of cooperation among all social entities in an effort to assist the most vulnerable social groups. “I am glad to see a lot of smiling faces and a full kindergarten in the building that was flooded and completely devastated only four months ago. Revitalisation of the kindergartens hit by the floods was perceived as a priority task by the Ministry of Education, Science and Technological Development. Therefore, I would like to thank Eurobank and the “Ana and Vlade Divac“ Foundation for great help and huge funds invested so that this facility could start operating on September 01,” said Minister Verbić.
“As a socially responsible institution, Eurobank was among the first companies to provide vital assistance to the victims of the May floods across Serbia. Today, we are witnessing a successfully executed activity within the “Big Heart” project, which will help the youngest residents of Ub continue with regular life. I believe that we have sent a message that humanity and assistance to the local community are still appreciated and that cooperation of all factors is necessary for a better future,” said Filippos Karamanolis, President of the Executive Board, Eurobank.
Ana and Vlade Divac, the founders of the Foundation which is a long-standing partner on the Big Heart project, have noted that it is of “exceptional importance that the deadlines were respected and that the kindergarten is ready to welcome children in September, as promised, as well as that the Big Heart additionally financed a new children’s playground at the kindergarten premises, which was not planned initially. Therefore, we look forward to future projects with Eurobank and new smiles of children across Serbia”.
UB Municipality President Darko Glišić has thanked Eurobank and the Ana and Vlade Divac Foundation for the donation and completion of reconstruction works on time, as it enabled re-establishment of regular life for the children in the shortest possible period of time. He has reiterated that the municipality of Ub suffered huge damage in the May floods and that it is ranked among top five most devastated municipalities in Serbia.
So far the Big Heart has made more than 8,000 children happy, owing to nearly 22,000 Eurobank clients who use the “Big Heart“ MasterCard affinity card.