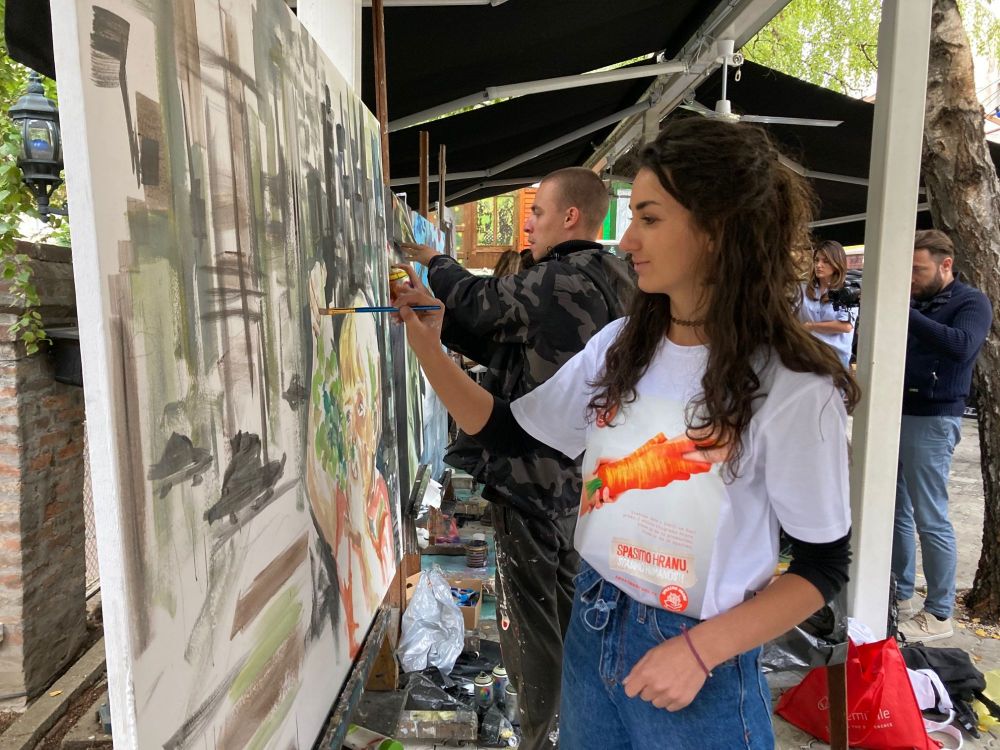 On the International Day of Awareness of Food Loss and Waste (IDAFLW), and within the campaign “Save Food, Save Humanity”, five young Serbian artists presented today their artistic visions about food waste and the need to increase solidarity among people and help those in need. The event was organized to mark the start of the third stage of the “Save Food, Save Humanity” campaign, which will consist of a series of food donation activities throughout the month of October, and with a peak on October 9, the National Giving Day, when there will be a series of events throughout Serbia.

Jovana Bojić, Aleksa Mišković, Vladimir Neckov, Jelena Janjić and Milica Cerovac are promising students of the Faculty of Applied Arts in the class of professor Miroslav Lazović, whose art pieces, that they started working on today, will be presented to the public during the celebration of the National Giving Day on October 9 in the Botanical Garden “Jevremovac”.

“It is our great honor to join this campaign and contribute through the way that we do the best, that is through our art. We invite all citizens to give their contributions and join the campaign, the best ways they can, even if it was only by donating through sending an SMS message,“ said Aleksa Mišković, one of the young artists.

At the same time, to support the campaign, Bar and Restaurant 369 which operates within MaxBet Group, prepared 100 meals that were distributed to the sellers of Lice ulice magazine.

Seven percent of the population in Serbia, almost half a million people, live on the edge of absolute poverty, while an estimated two million kilograms of food are being wasted daily. Through the campaign “Save Food, Save Humanity”, Coalition for Giving is raising awareness of excessive food waste and insufficient food donations, and also contributing to the creation of improved practices and ecosystem which will increase food donations.

Within the campaign “Save Food, Save Humanity”, a crowdfunding campaign has been initiated earlier in September, and from this week, an SMS number 4540 is active for all citizens who wish to donate. Each SMS message will be charged with 100 dinars including VAT, while all monetary donations collected through this initiative will be used to secure food donations for the vulnerable citizens in the least developed parts of our country. For more information please visit spasimohranu.rs.

“This year on October 9 we will mark the National Giving Day for the fourth time, and this year we are especially proud because over 20 companies have already supported our efforts to promote and collect food donations,” said Željko Mitkovski, Project Manager, Ana and Vlade Divac Foundation.

So far, the campaign “Save Food, Save Humanity” has been supported by Lidl Serbia, Delhaize Serbia, DM, Nestle, AmCham, the Hemofarm Foundation, Eurobank, Erste Bank, the law office Živković-Samardžić, Gecić Law Office, BlackRock, Elixir Group, FoodScaleHub, NALED, Carnex Fond B92, MaxBet Group, Bar and Restaurant 369, Telenor, MTS, A1, McDonalds, Bambi and MK Group and the support of an even larger number of companies and organizations is expected.

The National Giving Day and the campaign "Save Food, Save Humanity" are being implemented as part of the Framework for Giving project, implemented by the Coalition for Giving, led by the Ana and Vlade Divac Foundation. Other members of the Coalition are the Trag Foundation, Catalyst Balkans, SMART Kolektiv, the Serbian Philanthropy Forum, the Responsible Business Forum, and the Serbian Chamber of Commerce and Industry.