Journalists, Chefs and Celebrities Team Up To Cook for Vulnerable 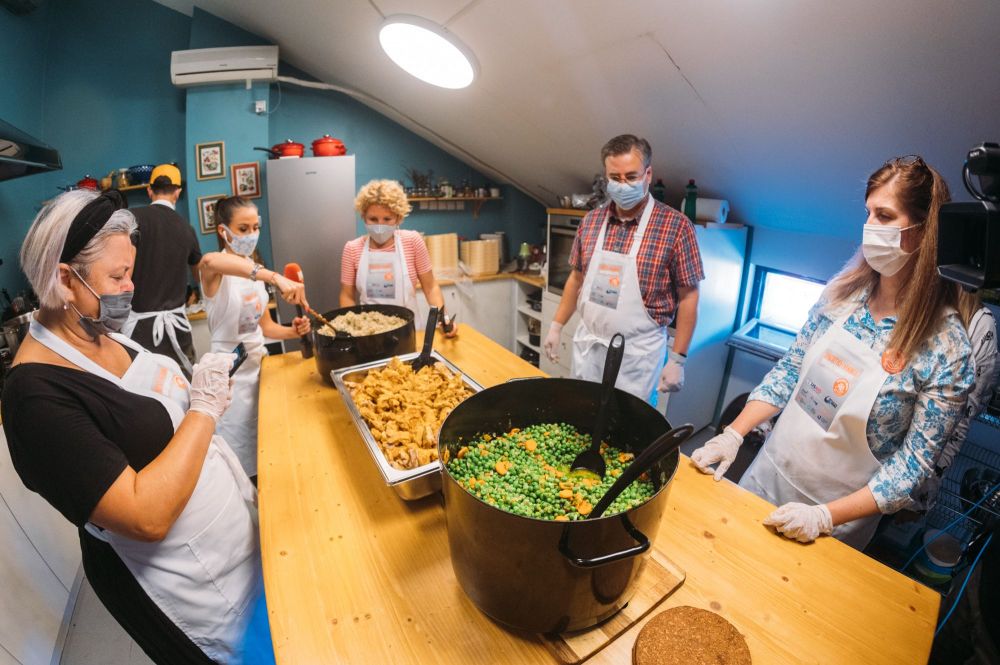 Within the national campaign "Save Food, Save Humanity", today, at the event „Media Humanitarian Kitchen“, media representatives, together with famous chefs and nutritionists, celebrities and representatives of companies which are supporting the campaign, prepared over 135 meals that were donated to the most vulnerable citizens.

“The campaign "Save Food, Save Humanity" directly points at the problem of excessive food waste and insufficient food donations, and with this event we wanted to show that united we can together address this problem,“ said Ana Koeshall, Director of the Ana and Vlade Divac Foundation.

Together with representatives of 12 media houses, the meals were preparing well-known nutritionists Tatjana Popović (totallywellness.rs) and Zvezdana Ljubenković (zvezdanaljubenkovic.com), actors Ljubomir Bulajić i Ivan Mihailović, representatives of companies Delhaize Serbia and Lidl Serbia which donated ingredients for cooking, representatives of the Coalition for Giving, and two citizens winners of the contests on Facebook and Instagram who presented the most creative ideas on how to reduce food waste at home. The meals were donated to the most vulnerable citizens in partnership with organizations ADRA Serbia and Lice ulice.

“We are stronger together, and united we can contribute to reduce food waste and increase donations of food to those who need it the most. This event shows the power of unity of stakeholders from different sectors,” said Veran Matić, director of Serbian Philanthropy Forum.

While today’s humanitarian activity was intended to help the vulnerable in Belgrade, all citizens and companies can join the campaign and the National Giving Day, which will secure food donations for the vulnerable citizens in least developed parts of our country. For more information please visit www.spasimohranu.rs

In Serbia, seven percent of the population, that is almost half a million people, live on the edge of absolute poverty, while an estimated two million kilograms of food are being wasted daily. Through the campaign “Save Food, Save Humanity”, Coalition for Giving is trying to raise awareness of excessive food waste and insufficient food donations, and also to improve practices and ecosystem which will increase food donations.

So far, the campaign “Save Food, Save Humanity” has been supported by Lidl Serbia, Delhaize Serbia, DM, Nestle, AmCham, the Hemofarm Foundation, Eurobank, Erste Bank, the law office Živković-Samardžić, Gecić Law Office, BlackRock, Elixir Group, FoodScaleHub,,NALED, Carnex and MK Group and the support of an even larger number of companies and organizations is expected.

The campaign "Save Food, Save Humanity " is implemented as part of the Framework for Giving project, funded by the United States Agency for International Development (USAID), and implemented by the Coalition for Giving, led by the Ana and Vlade Divac Foundation. Other members of the Coalition are the Trag Foundation, Catalyst Balkans, SMART Kolektiv, the Serbian Philanthropy Forum, the Responsible Business Forum, and the Serbian Chamber of Commerce and Industry.