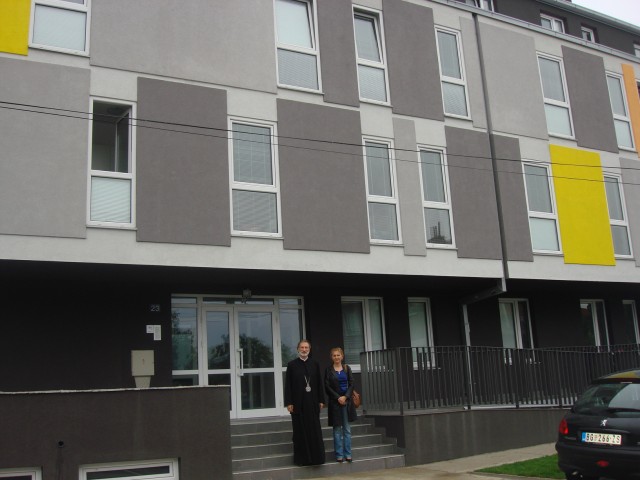 During his stay in Serbia, His Grace Bishop Irinej visited a newly constructed building for the social housing  in a supportive environment in Veliki Mokri Lug in Belgrade's municipality of Zvezdara. Eleven refugees and nine internally displaced families who have lived until recently in collective centres in Belgrade, on April 20, 2012 moved into flats in Veliki Mokri Lug.

Upon the initiative of the Foundation "Ana and Vlade Divac," and in cooperation with the UNHCR, a project of construction for social housing was carried out  in the City of Belgrade. The City of Belgrade has strongly supported the project and donated the land with complete infrastructure for the four buildings for social housing in supportive environment. The construction of the first building was supported by the U.S. government, and funds for the second and the third building was provided by IPA funds of the European Union. The first building is occupied, construction of the second and third building is underway, and the Foundation "Ana and Vlade Divac" actively raising funds to build the fourth building.