Winners of the competition ’Idea for a Better Tomorrow’ announced 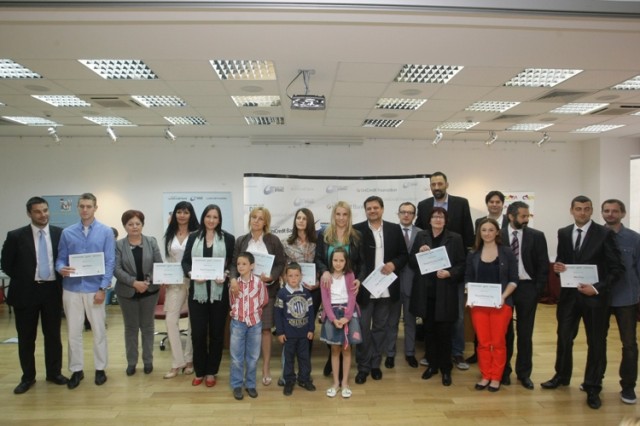 Representatives of Foundation Ana and Vlade Divac, UniCredit Foundation and UniCredit Bank presented today the winners of the competition ‘Idea for a Better Tomorrow’. The goal of the competition was identifying the ideas for products or services which can contribute in the best way to the improvement of Serbia’s image in the region and abroad, and at the same time influence the improvement of country’s export potential. In the period from November 7th until December 26th social companies, small cooperatives, companies employing marginalized and vulnerable groups and individuals, as well as families and individuals, applied with 230 ideas. In basis of the innovative aspect of the these ideas and sustainability of the project, 9 best candidates were chosen which were awarded with grants in the overall amount of EUR 56,000. This project is supported by Serbia Investment and Export Promotion Agency (SIEPA) and Tourism Organization of Serbia (TOS).

The jury has chosen 7 candidates with the best ideas, three from the category of legal entities and four from the category of individuals/families, while UniCredit Bank employees, who were also involved in the voting process, have chosen one winner from both categories. In the category of legal entities awards went to „Strawberry Energy“ for the production of Strawberry mini SOS device, to „Serbian Film Association“ for the development of data base of movie locations in Serbia, to Studio „Štap&kanap“ for the production of jam made of chili peppers, as well as to Association „Old crafts for a new age“ for the adaptation of souvenir shop in Prijepolje. When talking about individuals and families grants were awarded to Miloš Erceg for Kapris goat cheeses, to Mirjana Luković for organic production of raspberries, to Nikola Ninkov for the production of cold-pressed sunflower and soybean oil, to Slađana Pajović for the foundation of social enterprise for production, promotion and sale of typical Serbian handicrafts , as well as to Slavica Vračarić for the production of healthy food, characteristic for Kremna area. Legal entities were awarded with the overall amount of EUR 34,000, while individuals and families received EUR 22,000.

Guido Munzi, representative of UniCredit Foundation stated: “For more than 5 years, our Foundation is supporting projects focused on vulnerable categories of citizens in Serbia. That is one of the reasons why we have also decided to implement here “Idea for a Better Tomorrow”, the project which has been previously conducted in some countries in which our Group is operating. We are really proud that this project has a wider dimension, since, in addition to ensuring economic sustainability, it is putting the focus on products and services that can contribute to the promotion of Serbia abroad and to the improvement of competitiveness of its export. We are very satisfied with the selected ideas and we are looking forward to promote them abroad.”

Snežana Divac, Founder and Member of the Management Board of the Foundation Ana and Vlade Divac in occasion of announcing the winners stated: “When, together with our partners, UniCredit Foundation and UniCredit Bank, we announced the start of this competition in November, we couldn’t even imagine the interest that it would produce. But, the number of 230 applied ideas speaks enough for itself. Because of this I have to say that the jury had an extremely difficult task which was to choose, from a number of innovative, but above all specific ideas, the best ones. I would like to point out that our job is not finished here. Namely, in order to ensure the successful implementation of ideas and influence the placement of these products/services on the market, in the next period our experts will monitor the conduction of all winning projects.”

Claudio Cesario, CEO of UniCredit Bank Serbia stated: “I am very proud that, together with our partners, we participated in the first edition of this important project whose goal is to influence the development of Serbian production in the field of typical, homemade products and services, and consequently the export potential of the country and its recognition abroad. For more than six months the jury was engaged in selecting the best ideas, but I would also like to point out that all of our employees were also included in this process. Now the winners are chosen and I am very proud of their ideas and at the same time convinced that a bright and successful future is waiting for them. Through the participation in this project once again we demonstrated our strong commitment, as well as the commitment of UniCredit Group to Serbia.”

Project „Idea for a Better Tomorrow“ is organized in several phases, while its expected duration is 10 months. In the first phase, which lasted from November 7th until December 26th, the defined categories applied with their ideas which, according to their opinion, could promote Serbia abroad in the best way. After the expiry of the application period, jury has chosen 39 best ideas from the categories of legal entities and individuals/families. In the second phase, experts worked with 39 selected candidates on the development of business plan. Afterwards, the jury has chosen the winners. In order to ensure successful implementation of the ideas, in the next phase, the monitoring of winning projects will be conducted.

Read more about the winners