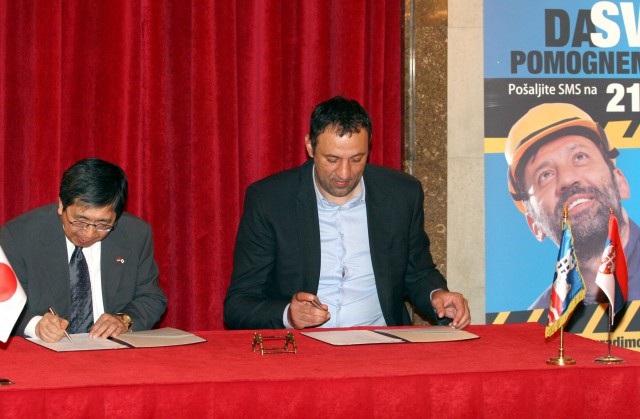 Today in the City hall, it was signed an Agreement on donation, between the Ana and Vlade Divac foundation and the Japanese embassy in Belgrade, within the “Let’s all help” project concerning social housing in supportive environment.

The event was attended by Kazuaki Kameda,charge d’affaires of the Japanese embassy in Serbia, Dragan Đilas, mayor of Belgrade city and Vlade Divac, founder of the Ana and Vlade Divac foundation.

By this formal signig of the Agreement, Japanese embassy has joined the group of donors that are engaged in social housing in supportive environment project. The Ana and Vlade Divac foundation initiated this project in 2010 and they still carry it out in association with UNHCR , the Commissariat for refugees and displaced persons, with the city of Belgrade,with the support of the Radio and Television of Serbia. (RTS).

“The project of social housing in supportive environment was supported by 25 000 people from all over the world, just during the 2012. I am very honored that the Embassy of Japan is involved in the project and that they recognized importance of this action. The donation that was given to us by a great friend of our country, will help us to accomplish the goal of the “Let’s help all!”project and to finish the construction of the fourth building for social housing.” said the founder of Ana and Vlade Divac foundation.

“Social care is one of the main issues in Serbia in the focus of Japanese government.Embassy of Japan is very honored to participate in such a great project that bring us closer to the solution to the problem of refugees and internally displaced persons in Serbia.” said mr Kazuaki Kameda, charge d’affaires of the embassy of Japan in Serbia.

The Ana and Vlade Divac foundation started raising funds for the construction of the fourth building in March 2012. The social housing in supportive environment is intendend for the most threatened refugees and displaced families, that are still situated in collective centers on the Belgrade’s territory.