The strongest motivation for Serbian citizens to participate in charitable campaigns is the feeling that they are doing a good deed, and the belief that they are helping to solve an important problem with their personal contribution. 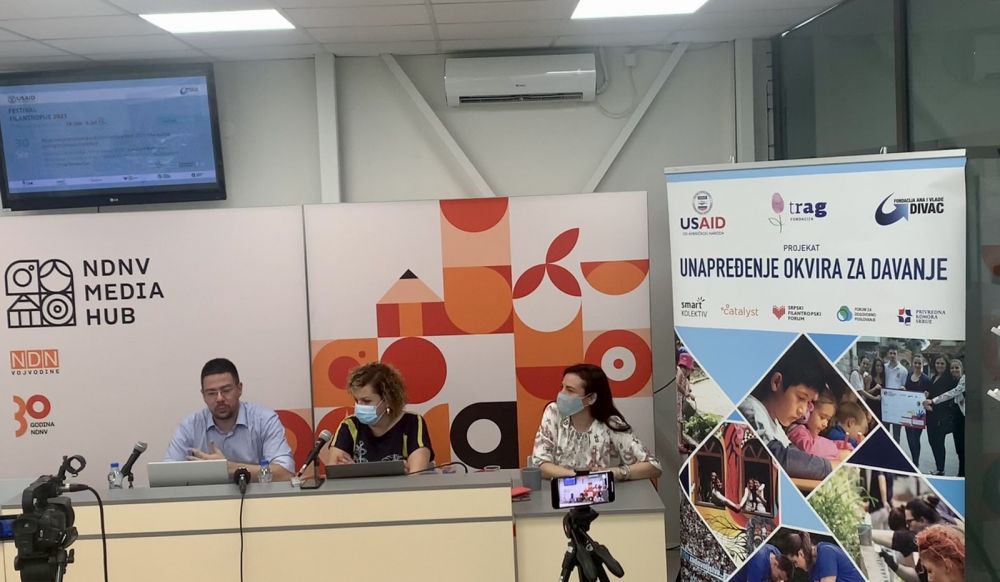 Novi Sad, June 30, 2021 - According to Catalyst Balkans’ report „Giving Serbia 2020“, citizens and companies in Serbia donated over 90 million Euros for the common good in 2020. The total value of donations addressing the effects of the pandemic was 42.1 per cent of the total amount. This is a 2.7 times increase in donations comparing to the previous year. Even donations unrelated to the COVID-19 pandemic exceeded the total value of donations in 2019 by over 10 million Euros. This brought an increase in the average donations per individual from 4.9 Euros in 2019 to 13 Euros last year.

The strongest motivation for Serbian citizens to participate in charitable campaigns is the feeling that they are doing a good deed and the belief that they are helping to solve an important problem with their personal contribution. Findings of the Trag Foundation’s public opinion survey about Philanthropy in Serbia in 2020, “Philanthropy and Us - Getting Closer Together“, carried out by Ipsos Strategic Marketing, also shows that citizens were highly motivated to help children suffering from rare illnesses and disabilities, children without parental care, people with serious medical conditions, the poverty-stricken individuals and victims of violence.

Companies have mostly been donating to the government and public institutions for the fight against COVID-19, while citizens have been actively donating via SMS for the medical treatments of individuals. If we discount the fact that addressing the effects of the pandemic represented the largest share in the number of giving instances during the year, the key themes for 2020 remained the same, retaining the order as in 2019 - healthcare (25 per cent), support to marginalized groups (14 per cent), poverty relief (9 per cent) and education (7 per cent).

"After several years when individuals were more active donors than the corporate sector, the situation changed in 2020, with companies providing more than half of the recorded sum while the donations of individuals comprised around 35 per cent. Companies have mostly been donating to the government and public institutions for the fight against COVID-19, while citizens have been actively donating via SMS for the medical treatments of individuals," said Miloš Janković, Partnerships and Engagement Director, Catalyst Balkans.

Trust in organizers of philanthropic campaigns was also a very important motive for citizens to take part in philanthropic activities. Foundations are ranked as highly third on the list of organizations that Serbian citizens cited as those which they would support in their goal of raising funds for a noble cause, following personal initiatives of citizens and initiatives of healthcare institutions. The Serbian public sees foundations as trustworthy entities, and they are believed to possess expert staff and the power to mobilize when launching philanthropic campaigns.

“Nearly half of the citizens would give money to a foundation that invests in the common good. Also, if they do decide to channel their money through foundations, most respondents (42 per cent) would like to occasionally receive information about the course of their donation. Just over a quarter of them said that they wish to receive reports regularly, while one in ten respondents expressed readiness to personally engage as a volunteer in a campaign of contributing to the common good. To us, this indicates that it is necessary to encourage citizens to pursue other forms of giving, such as donating goods, knowledge and time, but also to provide supporting mechanisms for them, such as tax reliefs and more favourable legislation,” said Marija Mitrović, Philanthropy and Partnerships Director at Trag Foundation.

Both Report “Giving Serbia 2020” and Public opinion survey “Philanthropy and Us - Getting Closer Together” which were presented today to Vojvodina media in Novi Sad within the Philanthropy Festival is part of the Framework for Giving project, funded by USAID and implemented by the Coalition for Giving led by the Ana and Vlade Divac Foundation.  Other Coalition members include the Trag Foundation, Catalyst Balkans, SMART Kolektiv, the Serbian Philanthropy Forum, the Responsible Business Forum, and the Serbian Chamber of Commerce and Industry. The research for Report “Giving Serbia 2020” was done by Catalyst Balkans in partnership with Trag Foundation with additional support from Charles Stewart Mott Foundation, Rockefeller Brothers Fund and Balkan Trust for Democracy.