In order to increase public awareness of the problem of food waste and insufficient food donations, and also to contribute to the improvement of practices that would encourage increased food donations, the Coalition for Giving led by Ana and Vlade Divac Foundation, with the financial support of the United States Agency for International Development (USAID), launched the campaign "Save Food, Save Humanity" on August 23. 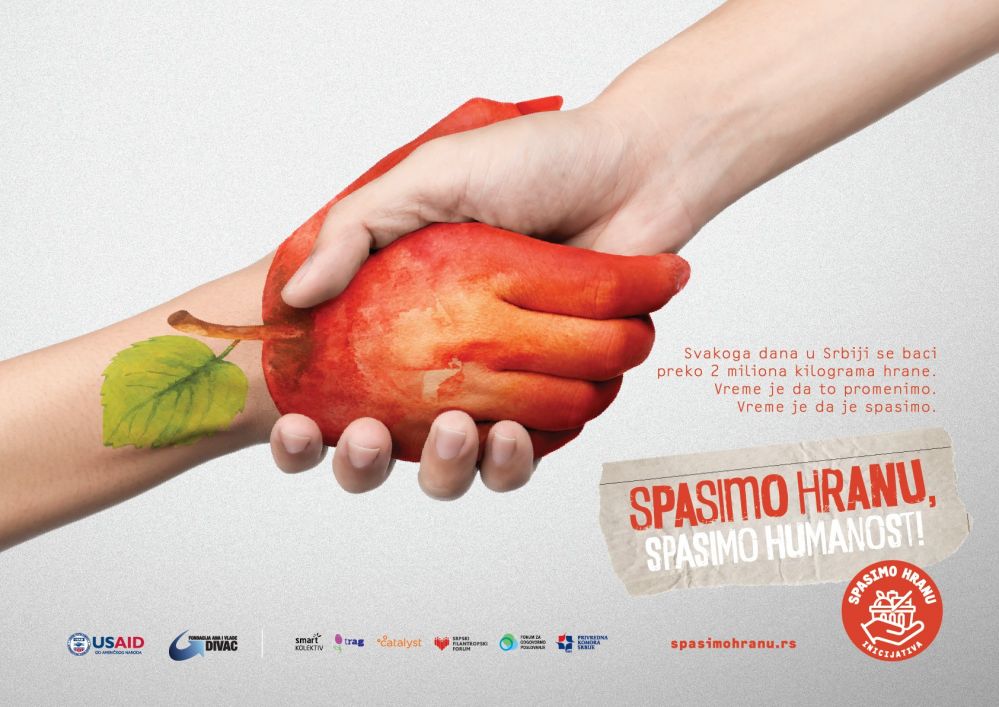 BELGRADE, August 23, 2021 - The campaign, which will run until November this year, will include food donation actions before the National Day of Giving , as well as during the day itself, which is traditionally held on October 9.

In Serbia, seven percent of the population lives on the edge of absolute poverty, that is, almost half a million people. Almost a quarter of the population (23.2%) is at risk of poverty. Many of these Serbian citizens depend on food donations, which are currently insufficient, while an estimated two 2 million kilograms of food are thrown away daily in Serbia.

Despite the fact that food donations are increasing, and food producers and merchants want to donate surplus food to soup kitchens, food banks, and charities, the amount of food donated still makes up only a small portion of the total surplus edible food available in Serbia. The solution lies in the closer cooperation of all stakeholders.

When it comes to environmental impact, data from the UN Food and Agriculture Organization (FAO), indicate that food destruction is one of the biggest air pollutants, generating eight percent of global greenhouse gas emissions.

"With the ’Let's save food, let's save humanity’ campaign, we want to contribute to increasing food donations for the most vulnerable and to reduce the waste of food that is still safe for human consumption. We expect great support from citizens, companies, civil society organizations and the media, and we invite everyone to get involved," said Ana Koeshall, Director of the Ana and Vlade Divac Foundation.

So far, the campaign has been supported by the law office Živković-Samardžić, the Hemofarm Foundation, Eurobank, Erste Bank, Gecić Law Office BlackRock, Elixir Group, Elixir Foundation, DM, Nestle, Delhaize, SOS Children's Villages Serbia, Federation of Food Banks of Serbia, Humano srce Šapca, Food Bank Belgrade and American Chamber of Commerce, and the support of an even larger number of companies and organizations has been announced.

The campaign " Let's save food, let's save humanity " is implemented as part of the Framework for Giving project, funded by the United States Agency for International Development (USAID), and implemented by the Coalition for Giving, led by the Ana and Vlade Divac Foundation. Other members of the Coalition are the Trag Foundation, Catalyst Balkans, SMART Kolektiv, the Serbian Philanthropy Forum, the Responsible Business Forum, and the Serbian Chamber of Commerce and Industry.